How have you become a poet? What prompted you to express yourself in verses?

Poetry for me is a life code, it's my lifestyle. Poetry is my way of expressing myself. Poetry accompanies me from my early high school years. Around my fourteen years of life, while studying at school literature about life values as many great poets describe, like Kavafis, Palamas, Kariotakis, I got influenced and started writing.

Around that time my friend's sister death, who committed suicide, scarred me. I started writing texts filled with shadows and adolescence sensitivity. Besides, that period was filled with political incidents that described Athens' society. It was when Greece changed its page in history walking towards Democracy again. It was when the students of Polytechnic with their "resistance" on November 1973 claimed high life ideals and freedom of expression.
Do you think you were meant to be rather a poet than a Chemical Engineer or the opposite? How do you combine both these capacities, that are quite different one from another?

My studies and master studies determine the way I can fund my needs in life. Poetry defines a good life. The way of thinking that my studies subsidised is unique. A mechanic learns to analyse, classify and apply a "language" that when executed helps the society as a whole. These tools along with knowledge rig in a consistent way my poetic speech. In a few words, my studies in the science of Chemical Engineering, my master in Chemistry as well as "Creative Writing" coexist perfectly and give life to my writings.
Is, in your opinion, poetry an activity, that aims at the poet himself or at the reader/ audience? Is it vital for a poet that the reader/audience understands his poetry and its messages? Do you have any particular audience or an ideal reader, in mind when you write?

Poetry as I said in the beginning is a way of life. It's aesthetic and serves the human soul. As a one, it aims to be told in the memory of human existence. It is a dipole that concerns and the poet and the reader. This contact has a meaning and purpose. The poet must communicate with his readers. It's a commission that he must keep during his whole life. It is extremely important for this to happen and it must happen even after the poet's death. This, however, its his responsibility and he must make sure it happens through the effectiveness of his poetic work throughout his life. When I write I want to have fun, to be in inner peace and I want my thoughts to depict the thoughts of the people that read my poets. To depict their pain as well as their joy.
You have been writing poems for many years. Your first collection Border Cemetery was published in 1983. How would you say your poetry, as regards, the form, the themes, the narrative or the artistic/literary aesthetic has evolved since then? Is there a form you are most attracted to?

It is true that forty years passed from my first poetry collection "Border Cemetery" that was published on 1983 in Athens. Those poems were written in 1976, whereas my firsts steps towards poetry where in 1982 and had death as a motive, as I earlier said.
Imperialists and the breakthrough they had in the twentieth century in France influenced me, in combination with Kariotakis' pessimism and the adequacy of values as it is described in K. P. Kavafis' poems. Since then, though, many things have changed in writing and some have stayed the same.
Is there a recurrent theme you keep returning to?

As a great Greek poet once said " In our poetic life we write one poem and that in all its variations.". As long as I'm concerned love, death and human values are repeated patterns of my textual approach.
Who are some of your biggest influences in your poetry?

There are a lot of influences, such as the poetic memories of Omiros, L. Kalvos, O. Elytis, Romanos the Melodist, the folk songs and the Maniatika dirges.

What is the state of contemporary poetry in Greece? Have new remarkable poets emerged in Greece during the last years? Is there a significant production in Greece nowadays?
Poetry in Greece had always its dynamic. We always had a publishing production even in difficult periods such as Second World War or military Dictatorship. The question is if it had an audience identification. Although many publish poetry collections in different ways, a few of them really read poetry. In Greece live magnificent poets, but due to the difficulty of the language and political support from the Ministry of Culture for the poetic reason, the communication with the global audience in not possible. But there are a few exceptions. There is a confusion about the modern Greek poetry around the world due to its fragmentary study.

What do you see as the role of a poet in modern-day society?

A contemporary poet's role is what the words of my intellectual father Antonis Samarakis describe "To be the voice of the ones that don't have a voice.".

Many of your poems have been translated in several languages What is your stand on translating poetry? Can a translated work truly do justice to the original poem?
It fills me with joy that my poems have been translated in 15 languages and have been published in many countries. Though, it is true that the translation in another language lacks the initial rhythm and melody, which is the most important thing for poetry. Of course the conceptual values transfer the poem's dynamic. So in translation there are two poets walking hand by hand. The poet who writes the poem and the poet who translates it.
Apart from poet, you are also a literary critic. How does one even begin to judge poetry? Is there some yardsticks that help you define a "good" poem from a not so great one?
This question can be answered with a theoretical dissertation that converses with the element of critic and critic nowadays.
The theory of Literature in twentieth century with the important theoretical that produce significant work such as I.A Richards, R. Jakobson, Ferdinand De Saussure, Julia Kristeva, Jacques Derrida, Michel Foucault and many others has rigged us with the tools we need to approach modern literature. In the modern Greek Letters apart from a few texts that are critical approaches, there is no constructed critical word. Book reviews mostly with friendly approaches happen a lot, but few of them have critical value. This phenomenon has a sociological feature because none of the involved wants to go against the other poets.
You are the founder and the administrator of the cultural organisation "Grafeíon Poiíseos". Could you please tell us more about the aims and activities of the "Grafeíon Poiíseos"?

The Poetry Desk is a cultural sector found in the city of Patra and serves literature and especially poetry. Many university professors, poets, philologists and literature critics contribute its purpose. It has created the cultural norm of poetic portrait, the international awards "Jean Moreas" and the "Patras Word Poetry Festival" with president the professor of West Macedonia University Triantafyllo Kotopoylo. The "Poetry Desk's" aim is to communicate with the modern Greek poetry in all the world. To deposit documents as well as online tools for the better study of modern poetry.
It is a identified carrier because its actions support the Ministy of Culture, the Ministry of Tourism, the Western Greece Region, the University of Patras, the Open Greek University, the Open University of Cyprus, the Western Macedonia Region, the Greek Library of London. Furthermore, it claimed the support of then president of Greek Democracy Prokopis Pavlopoulos and former president of Democracy Katerina Sakellaropoulou. The "Poetry Desk" has as an online contact forum the culturebook.gr.
We would like your comments on the recent EUNIC's on line European Poetry Night (November 9), in which you took part. How did you find interaction with other European poets? Do you think you share common attitudes and views on contemporary poetry?

It was a great honour for me and my work to be chosen by E.U.N.I.C. to represent Greece in "Writers 2020". It is important for a poet that his work is recognized and for him to communicate with fellow poets and international audience in this way. It's a great work by the worldwide famous institution "The Poetry Society" that co-organized this event because as a specialised carrier of poetry, it deposits important work in the communication of poetry.
This meeting was important because poets from all around the world chatted essentially about matters that concerned poetry. The great poet George Szirtes coordinated and managed in a masterful way the conversation giving space and time to develop our thoughts about literature, poets from different countries and cultures. My participation in this conversation allowed me to talk about my poesy as well as to analyse my thoughts about the modern Greek poetry and translation in general.

What advice would you give to an aspiring poet?

My advice, if I can give one, is that with dignity, truth, knowledge and harmony to serve not only poetry but also her art, that's none other than the poetic art.

Press Office of the Greek Embassy in London 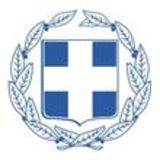 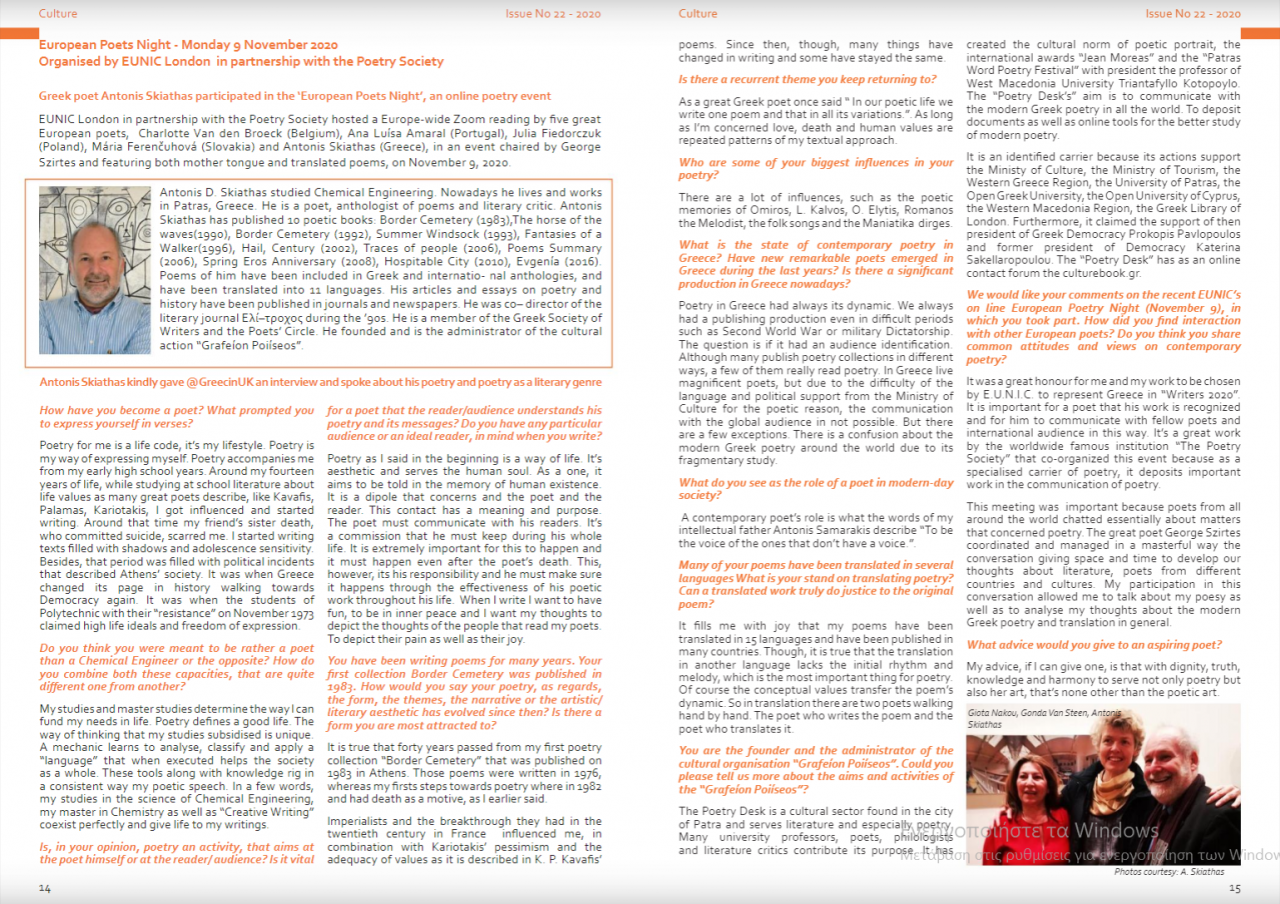